Owning your own home is considered by many to be an essential element of “making it.”  In fact, a recent national survey commissioned by NeighborWorks America found that 88 percent of adults say homeownership is at least somewhat important to their definition of achieving the “American dream.” 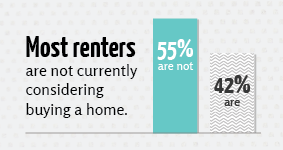 However, according to Harvard’s Joint Center for Housing Studies, more than a third (35 percent) of all adults in the country are currently renters. And the NeighborWorks America survey found that slightly more than half (55 percent) of renters are not intending to change that status – at least not now. I am one of them (both out of choice and necessity), and sometimes, with the strong U.S. cultural bias towards homeownership, it can feel a bit like being a second-class citizen – especially if you aren’t a 20-something fresh out of college, in which case everyone knows it’s just a matter of time.

Perhaps no other story in the media best captured this public ambivalence about renters than an Aug. 28 article in The New York Times, headlined “As Renters Move In, Some Homeowners Fret.” Writing about a neighborhood in which a growing number of single-family homes were being occupied by renters in the wake of the foreclosure crisis, the author wrote: “The decline in homeownership is changing many neighborhoods in profound ways, including reduced home values, lower voter turnout and political influence, less social stability and higher crime.” 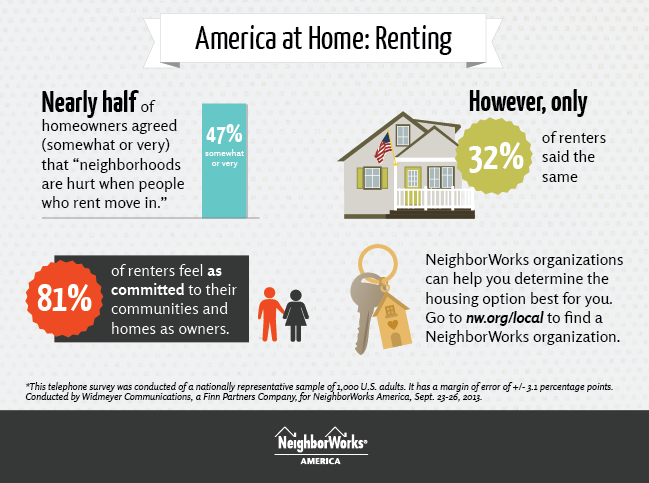 The New York Times ran a second such article ("Homebuyers are Scarce, so Renters Take Their Place") on Dec. 5, quoting Atlanta-area residents who were alarmed at the news that a number of houses in their neighborhood were being rented rather than sold: “I can see three or four or five rentals in this neighborhood, but the whole community? I’m worried about my property value,” said one.

In the NeighborWorks America survey, nearly half (47 percent) of homeowners agreed (somewhat or very) that “neighborhoods are hurt when people who rent move in.” However, only 32 percent of renters said the same, and 81 percent described themselves as being as committed to their neighbors and community as they would be if they owned their residence.

So…what explains the gap in perceptions? And, how can we build more of a community between the two groups, so that we’re all neighbors -- not owners vs. renters? The next three blog posts will explore those questions. Check back daily for the rest...or sign up to receive new posts directly in your inbox!