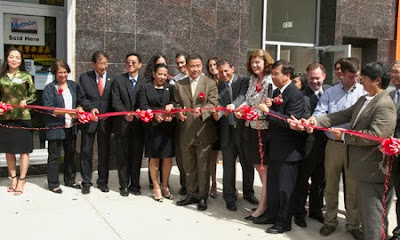 NeighborWorks CEO Eileen Fitzgerald helped to mark the opening of Asian American's for Equality's new site in Brooklyn, made possible by a $300,000 expansion grant from NeighborWorks America. With the new office, AAFE now has a physical presence in each of New York City's three major Asian American hubs.

“Although we serve any client who visits us, AAFE’s goal has always been to respond to the needs of the Asian community in New York,” said Christopher Kui, executive director of AAFE. “This goal pushed us to expand beyond Chinatown to Flushing, Queens almost ten years ago, and now again to Sunset Park in Brooklyn.”

“NeighborWorks America is pleased to support AAFE’s expansion into Sunset Park so the organization can better serve Brooklyn and Brooklyn’s Asian communities. We are confident that AAFE’s programs at the new Sunset Park location will empower families and build strong communities for future generations, and we look forward to AAFE’s continued success,” said Fitzgerald.

Over 100 guests were on hand at the September 17th ribbon cutting, including NYC Comptroller John Liu, the first citywide Asian American elected official, and Commissioner Fatima Shama from the Mayor’s Office on Immigrant Affairs as well as many other local elected officials and community organizations.