In honor of Hispanic Heritage month, the NeighborWorks America blog is profiling Matt Huerta, one of the many accomplished Hispanic leaders in our network of affordable housing and community development nonprofits. Huerta is executive director of Neighborhood Housing Services of Silicon Valley (NHSSV), a position he attained at the young age of 32. This interview was conducted by Alexandra Chaikin, online media project manager at NeighborWorks America.

What is your background and how did you get into affordable housing?

My grandfather was a bracero who came from Mexico City to the US during World War II as an agricultural laborer. He moved around a good deal, but eventually settled in Visalia, California. Eventually, he switched from working in the fields to working as a baker, enabling him to buy a home, which set the stage for a stable family life. His son, my father, married young, and started a family right after high school. To help make ends meet my parents took advantage of rental housing for several years before eventually purchasing their first home.

I was the first in my immediate family to go to a four year university. I graduated from the University of California, Davis with a Bachelor of Science in Community and Regional Development. During college, I participated in the California Coalition for Rural Housing Project (funded now, in part, by NeighborWorks). I also interned with Community Housing Opportunities Corporation, where I learned about farmworker housing, tax credits and the whole world of affordable housing and community development.  After that, I became an affordable housing advocate for life.

How did you become executive director at such an early age?

I had a good deal of prior experience before coming to NHS of Silicon Valley. In 2000, I ran for and was elected to be president of the associate students at UC Davis.  I was the first Latino ever to hold that position there. It was a challenge, but I was able to work with a large coalition of other progressive students and allies to push for greater accessibility for underrepresented students at the campus and across the UC system. I was also one of the first students to bring the issue of affordable housing to the forefront. Davis, like many other college towns, has inflated housing prices. As the primary representative for 20,000 students, I was able to participate in both local and state policy advocacy. For example, I worked on a team that amended the City of Davis’ “General Plan” to specifically target affordable student housing. This was important because 5,000-10,000 students were Pell Grant eligible, meaning there was a large number of students who needed access to affordable housing.

After college, I worked with Applied Development Economics where I wrote grants and helped cities and counties across the State access Community Development Block Grant funding.  In 2005, I became a project manager at South County Housing (a NeighborWorks Chartered Member based in Gilroy, CA) where I lead the effort to rebuild a farmworker housing community for 60-70 families and created a safe, healthy, and affordable housing development. I believe my success is because of my approach to work. I always choose the most challenging projects which has allowed me to exceed my personal expectations and those of others.

What should readers know about Neighborhood Housing Services of Silicon Valley (NHSSV)?

NHSSV was founded in 1995 by community leaders along with the San Jose Housing Department and NeighborWorks America. Silicon Valley is renowned for its technological advances and high incomes, but not all residents have opportunities to take advantage of technology or tech jobs,.  Many people are new immigrants who have limited education, and have to work two or more lower-wage jobs to make a decent living. They don’t have access to financial resources  but dream of owning a home. The other large group of low and moderate income people in Silicon Valley are teachers, young police officers and administrative employees. They need downpayment assistance to buy a home due to the high cost of living and house prices.

NHSSV works to increase opportunities for low and moderate income families by providing homebuyer education, foreclosure prevention services, mortgage lending, and community building and organizing.  Our services are important in this area because low and moderate income buyers can not compete with the large population of all cash buyers and investors. One of the reasons we are able to offer affordable housing is because we are the only nonprofit realty in Silicon Valley and the only non-profit first mortgage provider. We work with financial institutions to access real-estate owned properties and short sales. We also act as a resource to local governments who need assistance managing their affordable for-sale inventories. If a client of ours has to go through foreclosure, we not only help that client navigate that process, but also reserve the home for other low and moderate income families rather than letting it go to the highest bidder.

Our commitment to improving our community does not end with creating homeownership opportunities. NHSSV supports neighborhood leaders through several key initiatives including sponsoring the Neighborhood Development Training Conference at San Jose State University which serves 400 leaders with capacity building workshops each year so that they can complete their own high priority projects and programs. In partnership with neighborhood leaders, NHSSV has established the Responsible Landlords Engagement Initiative which responds to requests to help hold landlords accountable to making lasting physical and social improvements at their properties. 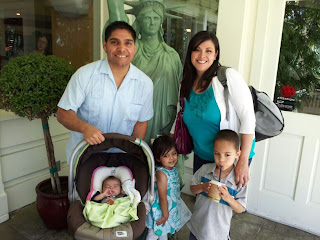 This is great work. What motivates you to get up in the morning?

I’m motivated by the feeling that I’m part of something bigger than myself and that every day I can see the results of my efforts. I truly believe that affordable housing development is a movement which contributes to social justice.  Now that I have a family, a wife and three young children, it’s even more important to me to work toward a brighter future for them, and for all those in our shared community.

Thank you. We’re pleased to have you as part of the NeighborWorks network.

For more on NHS of Silicon Valley, visit http://www.nhssv.org or connect with them on Facebook or Twitter.