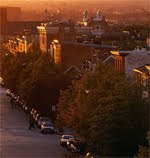 Throughout the housing boom and subsequent crash America’s most and least affordable housing markets have remained largely unchanged, according to a recent BusinessWeek report.

In 2009, America’s most affordable housing market was Kokomo, Indiana, and homes in other Midwestern cities remained on top of the affordable housing list. Likewise, most homes sold in pricey East and West Coast metros remain unaffordable for average earners.

But 2009 offers some hope for homeowners, whether they are modest or high-income earners. According to BusinessWeek, buying a home this year hasn’t been this affordable in a generation. Across the board, home prices have plunged, interest rates are at near historic lows and the government is kicking in as much as $8,000 to encourage first-time buyers to purchase a home.

Read more about where to find the nation’s most affordable housing and view these interesting photos of the ranked cities.
at 3:00 PM No comments: