Reposted from the "Stabilize" blog of the NeighborWorks America Stable Communities program.
----------

The latest issue of New England Community Developments from the Federal Reserve Bank of Boston has a couple of articles particularly interesting for those engaged in stabilizing neighborhoods.  In the first, the author discusses preliminary findings from ongoing research exploring the effect of foreclosure and NSP intervention on neighborhood social stability, with surprising results. The second presents a logical framework for deciding what REO is best marketed as rental property.

In "What Do the Neighbors Think? Assessing the Community Impact of Neighborhood Stabilization Efforts," author Erin M. Graves describes her research assessing residents’ perspectives on neighborhood-level social capital and social disorder.  She hopes to assess the impact of foreclosed properties on those residents before and after NSP intervention. 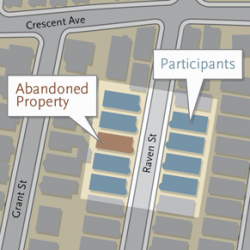 Graves used a standardized “Sense of Community” survey administered door-to-door, and also assessed property conditions of all parcels in the subject neighborhood.  In the article, Graves describes three themes that emerged from the first round of the survey. The first theme was that residents did not view the vacant foreclosed homes on their street as the primary threat to stability in the neighborhood; nor did they often realize which were due to foreclosures.  If they did know of a foreclosure, they saw it as an individual problem rather than a community problem or trend.

Second, existing crime and gun violence were the main concerns of these neighborhood residents. Residents in this neighborhood did not see vacant properties as attracting crime, and they viewed vacant lots as a greater threat to their sense of community than vacant homes.

Third, residents did believe in the efficacy of government institutions, including the police, to solve community problems, but felt underserved by them.  In order to deal with the safety and property abandonment issues on their streets, Graves says residents defined ever-smaller boundaries for what they consider their [good] part of the community – a street, a section of a street, or sometimes only their house.  These carefully drawn boundaries allow some residents to enjoy and stay in their unstable neighborhoods longer than outsiders would expect them to.

For Graves’ discussion of policy implications, see the full article.

In "New Ideas for Old REOs : A Disposition Framework for Marketing REOs for Rental Properties,"  Prabal Chakrabati and Mariana Arcaya propose a four-step rationale for sorting a community’s REO portfolio to find those properties that are the best candidates for disposition as rental units.  The criteria include:
Additional considerations, such as proximity to transit and jobs, are also mentioned. The article includes an easy-to-read chart, and a specific analysis of Massachusetts REO inventory.

New England Community Developments is published by the Federal Reserve Bank of Boston.  Free subscriptions are available here.
at 12:49 PM No comments: