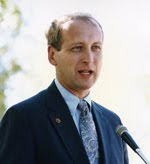 George Knight, former executive director of NeighborWorks America, was inducted into the Affordable Housing Hall of Fame in a luncheon ceremony held during The Affordable Housing Developers’ Summit on October 28 at the Palmer House Hotel in Chicago. Knight's wife, Kathy Desmond, accepted the award. Steve Tuminaro, NeighborWorks America’s director of Public Policy and Legislative Affairs and long-time colleague of George Knight, addressed the attendees, speaking of the significant growth of the NeighborWorks system under the Knight’s leadership. Tuminaro also spoke of the legacy for continued growth that Knight left with us.

Read the article in Affordable Housing Finance Magazine regarding the Hall of Fame inductees, and a tribute to George Knight.