﻿﻿﻿﻿ ﻿﻿﻿﻿
The legacy of former NeighborWorks America Executive Director George Knight lives on, with the recent dedication of new homes for seniors in his name. On June 28, NeighborWorks CEO Eileen Fitzgerald, participated in a ceremony to open the new George Knight Homes in Ashville, NC – a 63 unit apartment community in Asheville, North Carolina for low-income persons 55 years and older. The homes were developed by Volunteers of America, where Knight served as a board member for many years.

The dedication was also attended by Knight’s wife, Kathy Desmond and by the Mayor of Ashville and a number of other dignitaries. Desmond shared these photos from the event.

George Knight was executive director of NeighborWorks America from 1990 – 2000. He passed away in 2008, and a year later was inducted into the Affordable Housing Hall of Fame.
at 3:44 PM No comments:

HUD Secretary Shaun Donovan shares in this new video, the simple process for applying for the Emergency Homeowners’ Loan Program (EHLP). Homeowners interested in EHLP must complete and submit these Pre-Applicant Screening Documents to a participating EHLP agency by Friday, July 22: 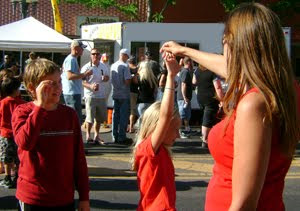 It was around 6 pm on July 14 when the band playing at a local public event in Great Falls, Montana suddenly stopped playing. An air horn sounded and a group of people, mostly dressed in red, froze. They were the staff, volunteers and partners of NeighborWorks Montana, and they had descended on Central Avenue for a flash mob demonstration aimed at raising awareness about the Emergency Homeowners’ Loan Program (EHLP).

Time is running out to apply for EHLP, a foreclosure prevention program launched by NeighborWorks America and the US Department of Housing and Urban Development (HUD), to help homeowners who have fallen behind on their mortgages as a result of job loss or underemployment. The $1billion program covers past-due mortgage payments as well as a portion of eligible homeowners’ mortgage payment for up to 24 months or $50,000, whichever comes first. The state of Montana received over $5.7 million in EHLP money and estimates it will help about 178 families throughout Montana.

All applications must be in by July 22. Participating housing counseling agencies are getting the word out, but perhaps none as creatively as NeighborWorks Montana!

Here’s video, pictures and a news article about it.

Students? Changing the World? We Think So!


The teens pictured here are among 386 volunteers who have fanned out across Buffalo, NY to repair the homes of seniors who are unable to do the work on their own. This is the sixth year in a row that the "World Changers"  have come to Buffalo, in a week-long effort sponsored by NeighborWorks affiliate Neighborhood Housing Services of South Buffalo.
Twenty-five homes and projects will be completed by the end of the week, including exterior and interior painting, roof repair and even maintenance of an abandoned, historic cemetery dating back to the Civil War.
"It is great having individuals from outside the area experience what Buffalo truly is — a city of good neighbors,” said Shryl Duderwick, NHS of South Buffalo's executive director. “We're helping the elderly stay in the homes where they are most comfortable and can have the fullest life. Our seniors are our neighborhoods."
"The volunteers are wonderful, very courteous and doing a great job," said Gregory Hunter, a lifelong Buffalo resident, who was having his front porch rebuilt and graffiti removed from his garage. "They are really helping me out a whole lot. The porch was rotted out and a hazard. I tried to fix it myself but couldn't do it right."

World Changers is a mission experience for students managed by the North American Mission Board. The week-long event in Buffalo is one of 96 projects in 85 cities undertaken by 21,000 student and adult volunteers.
Find out more about it from NHS of South Buffalo. View more photos here.

﻿﻿﻿Shared Housing for Seniors: The Golden Girls Got it Right!

It was September 14, 1985, and “Golden Girls” characters Dorothy Zbornak, Rose Nylund, Blanche Devereaux, and Sophia Petrillo had stumbled upon something great.  The four older women in the 80’s NBC sitcom lived together in a home in Miami, Florida, offering each other friendship and companionship in their golden years. Today, this arrangement is called "Shared Housing" and it has emerged as an actual retirement strategy.
What are the benefits to shared housing?
Shared housing allows participants to improve or maintain a certain standard of living that they may not be able to afford since leaving the workforce or becoming single or widowed. Instead of coming home to an empty house or apartment, they come home to a group of gals/guys who share their life and interests. Shared housing often allows seniors to “age in place,” close to the communities and amenities, such as transportation, healthcare and other services, they had been used to having for many years.
According to AARP and reported recently by Reuters in 2010 there were approximately 130,000 Golden-Girl type households across the country. That’s approximately 480,000 baby boomer women living with at least one female, non-relative roommate and no spouses.


Getting the right match is important
In Baltimore, Maryland, NeighborWorks affiliate St. Ambrose Housing Aid Center uses a match-up process that ensures all homeowners and potential renters get the right fit.  The screening process includes a background check, verification of income and a home inspection, and applicants must provide a list of their interests and living preferences.

Like what you hear so far?
Register today for NeighborWorks’ next symposium in Atlanta, Georgia on August 10, which will focus on ensuring safe, healthy homes and communities for seniors. The day will include discussions on a broad range of issues and opportunities for seniors as homeowners and renters, including a session on Aging in Place, where Rebecca Sheppard with St. Ambrose will talk about shared housing.
The National Shared Housing Resource Center also has more information, including a directory of  local shared housing opportunities for seniors.
at 10:41 AM 2 comments:

NeighborWorks Week Wrap-up: Some of What You May Have Missed

﻿﻿﻿﻿﻿﻿During NeighborWorks Week, June 4-11, local NeighborWorks organizations mobilized tens of thousands of volunteers, businesspeople, neighbors, friends, and local and national elected and civic leaders for a week of neighborhood change and awareness.


Here are some of the exciting events that happened during the 2011 NeighborWorks Week:

Volunteers Representing NeighborWorks Board Agencies Lent a Hand in DC

Volunteers from NeighborWorks America's board agencies came out during NeighborWorks Week to help with a flower planting project at Cardozo Court Condominiums, a property owned by Manna, Inc., our local NeighborWorks organization in Washington, DC. View photos.

FDIC Director Thomas Curry, chair of the Board of Directors of NeighborWorks America, joined Community Development Corporation of Long Island, Citizen’s Bank and other partners to celebrate local community development endeavors, including an energy efficiency retrofit of a home. Here's more information.

In Rhode Island, Senator Sheldon Whitehouse and Senator Jack Reed joined NeighborWorks America’s Robert Burns and Deborah Boatright at various ribbon-cutting events in Burrillville and Providence to celebrate the opening of new developments in the community.

A lot more happened during NeighborWorks Week 2011. View these pictures and videos.