Neighborhood marketing: Success is what you measure

This is the third and final post in a series exploring neighborhood marketing as a strategy for helping communities brand and generate attention for their unique strengths. Read the first and second installments. Neighborhood marketing is not an initiative for those who only have the time or commitment for a short-term program.

“What we’re after is real change – whether it be strengthened connections among residents, rising property values, thriving neighborhood businesses, or a better mix of renters and owners,” explains Paul Singh, senior manager of community stabilization for NeighborWorks America, adding that part of the challenge is defining just what success looks like. “It takes time. That’s why interim measures are so important.”

However, although he estimates only 10 percent of the plan has been implemented to date, West Humboldt Park already has some successes to celebrate. NHS has recently assisted three families, all long-term renters in the community (two for more than 20 years) buy and rehab long-vacant properties. Even better, the daughter of one of those buyers just signed a purchase contract for a vacant three-unit building just a block away from the home her mother purchased through NHS.

Likewise, in a neighborhood that for a long time had no sit-down restaurants, two establishments  have become city favorites, with a friendly competition to determine who has the best “jive turkey burger.” (A recent study by an urban planner found that restaurants are the leading force behind regenerating coup de grace was its ranking this 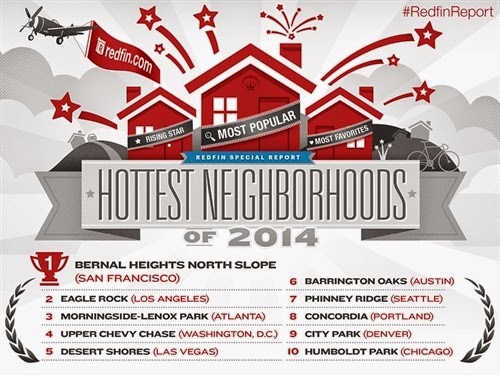 year by the Redfin real estate site, which neighborhoods.) But the produces an annual list of the country’s “hottest” neighborhoods. The company ranked 105 urban neighborhoods across 21 major markets that have grown the most in popularity during the four months leading into 2014. Humboldt Park was No. 10.  Although “hot” markets can bring their own challenges (for example, how to preserve affordability for existing residents), the Redfin ranking suggests that West Humboldt Park is increasingly seen as a desirable neighborhood.

NeighborWorks Pocatello (Idaho) is just starting its neighborhood marketing campaign, but Executive Director Mark Dahlquist knows that one of his first interim metrics must be the number of households that invest in beautifying their property, thus enhancing their “curb appeal.”

“We already give lots of home improvement loans, but now we are looking for funding so we can offer a small grant, or maybe a zero-interest loan, specifically for external enhancements,” he says. “Maybe we’ll also offer a workshop to show people all the ways they can make their houses a little less plain, or sponsor a contest.”

Dahlquist also estimates there are about 40 houses in the Old Town of Pocatello currently for sale. His goal is to keep out absentee owners.

“We don’t have a lot of vacant lots, but we do have some empty or unkempt properties that are either bank-owned or have absentee landlords,” he explained, adding that housing values in Old Town are about 30 percent lower than elsewhere in the city. “We’ve invested in our city’s central neighborhoods by building more than 135 new homes in the past 20 years. You can live in a charming house, but if you’re located next to something that is in poor condition, values drop. We need to push them up.”

Whatever a community’s reasons for needing to change perceptions, or how far long they are, the process of adopting a philosophy of neighborhood marketing can, both Dahlquist and Groene agree, offer an entirely new perspective.

“Neighborhood marketing broadens how you look at revitalization,” says Groene. “It forces you to really think about why people like living in a particular place. It has changed the way I speak to everyone. I talk about the good things going on in the whole neighborhood every time I go to block clubs, etc. It’s not just, hey, want to buy a home, or the most pressing problems of the day.”

NeighborWorks America will continue to document and share best practices that emerge from the Neighborhood Marketing Program. Resources, tools and templates are available that can assist with your own neighborhood marketing efforts.