Five years after the housing bubble burst, the caveat “buyer beware” unfortunately remains a fact of life for individuals hoping to re-finance their home or escape a foreclosure.

Although scams reported to the Federal Trade Commission and state attorneys general dipped in 2012 to 8,658, 2013 is seeing a significant uptick. If the current trend continues, the number of home loan scams reported in 2013 will exceed 11,000 – and that’s likely only the tip of the iceberg, since many such frauds are never officially recorded.  Along with the increase in reports is a worrying rise in average loss. According to the Loan Scam Prevention Database maintained by the Lawyers’ Committee for Civil Rights Under Law, the average loss from loan scammers in 2012 was $3,604; so far this year, it’s $4,098.

Barbara Floyd-Jones, program manager of local support for foreclosure solutions at NeighborWorks America, warned of the dangers of these “wolves in sheep’s clothing” on a recent episode of the nationally syndicated radio program, The Yolanda Adams Morning Show.

Even if the person offering you a so-called great deal is “is a lawyer or sitting with you on a pew in a church,” Floyd-Jones warned, know the signs and “stay away from those kind of people. Not everyone is out to help you. They’re trying to make money off you.” Listen to her interview here.

In fact, the involvement of lawyers is an increasing trend. In 2012, 36 percent of reported scams involved lawyers; in 2013, their share is 45 percent. These shady practitioners are often heard in radio ads, which is why interviews like the one Floyd-Jones participated in are so important. 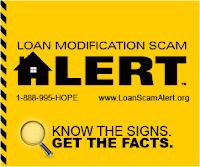 Recognizing the growing problem with loan scams, the U.S. Congress asked NeighborWorks America three years ago to launch a national public education campaign to empower homeowners to protect themselves through education and trusted referrals. Thus, the Loan Modification Scam Alert website and campaign were created. In addition to online education, it offers a call-in hotline, in operation 24 hours a day seven days a week, in 45 languages.

“By far, the most common scam is asking homeowners to pay a fee upfront or before a loan modification has successfully occurred,” says Floyd-Jones, adding that the most vulnerable targets are senior citizens and minorities for whom English is their second language. “The Federal Trade Commission ruled this practice is illegal in 2010, but most consumers don’t know it.”