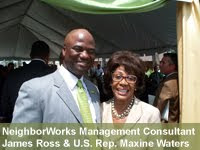 The Pontchartrain Park area of New Orleans was completely destroyed by Hurricane Katrina and the pace of recovery had been extremely slow. But thanks in part to NeighborWorks’ Gulf Coast partner Pontchartrain Park Community Development Corporation (PPCDC), residents now have an opportunity to rebuild their community and return home.

On May 14, PPCDC celebrated completion of the first of 250 homes it plans to reconstruct in the area. The organization is headed by Wendell Pierce, the actor from HBO shows Treme and The Wire, who is from New Orleans and was raised in Pontchartrain Park. He took on the task of assembling the development team and partners to make his dream of redeveloping the housing in the area a reality. One of those partners is NeighborWorks America, who provided $200,000 in grants to PPCDC to fund the pre-development expenses associated with the project. 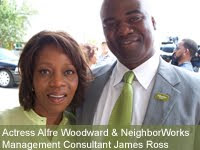 At the May 14 event, Pierce thanked NeighborWorks for stepping out and providing the initial pre-development funding. “When others said no, NeighborWorks said yes and we are sincerely thankful to them as a valued partner,” said Pierce.

Congresswoman Maxine Waters and actress Alfre Woodward also attended the celebration. Congresswoman Waters has visited New Orleans several times post Katrina to make sure resources promised by the government are delivered to the area. She thanked NeighborWorks America for the work it is doing in creating and preserving homeownership, not only in New Orleans, but across the nation.