‘Families and friends’ good for social support, not housing advice

It’s been five years since the full force of the Great Recession hit the United States, with a combination of risky mortgages and declining housing prices forcing approximately 4.6 million families into foreclosure. While more than 13 million households are still underwater, saddled with homes worth less than their mortgage loans, the crisis is losing steam. Foreclosures fell 3 percent in 2012, according to RealtyTrac, and this year is looking even better. In October, foreclosure filings were 28 percent lower than the same month in 2012.

Still, many families are still struggling, and making smart choices will continue to be critical for both the next wave of new house buyers and existing owners working to hold on to their homes. In the aftermath of the crisis, are people now equipped with the information they need to negotiate the right mortgage, as well as to make other pivotal choices? If not, do they know where to go to get help that can be trusted?

To learn the answers to those and related questions, NeighborWorks America commissioned a nationally representative survey of 1,000 adults, which was conducted by Widmeyer Communications, a Finn Partners company, Sept. 23-26.  Among the many findings: Seventy-five percent of adults describe the the home-buying process as "complicated," and a quarter (24 percent) admitted to not being knowledgeable about the different kinds of mortgages.

So where, then, do they turn for advice when buying a house or avoiding foreclosure – a decision that is usually among the biggest financial choices they will make in their lifetimes? More than any other source, “family and friends” are relied upon most often. 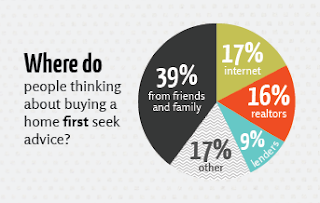 When respondents who said they are considering buying a house were asked where they go to first for advice, more than a third (39 percent) cited family and friends who had already purchased a home. Distant runners-up were the Internet (17 percent) and real estate agents (16 percent). Far behind were housing counselors and (more specifically) non-profit homeownership advisers (3 and 5 percent, respectively).

The patterns for seeking information on foreclosure prevention are similar.  Individuals are most likely to turn to family, friends and co-workers (30 percent), followed by the Internet (27 percent), real estate agents (26 percent) or mortgage lenders (23 percent). Just 17 percent of respondents reported they are “very likely” to consult with a housing counselor. The reliance on friends, family and co-workers is especially seen among adults under 55 (37 percent) – particularly women.

There is nothing wrong, of course, with calling upon your social network. In fact, much research has documented the importance of family and friends in helping individuals cope with all sorts of stress. However, rarely are they professionals in the field of housing or banking, and even when they have gone through the process of home buying or loan modification themselves, each family’s financial situation is unique, not to mention the fact that rules vary depending on the lender and the timing.

“Having a supportive family is wonderful, and the Internet offers a wealth of information,” says Rose Marie Roberts, an advisor with the NeighborWorks Homeownership Center in Utica, NY. “But I wouldn’t go from there to action.” For example, when trying to prevent foreclosure, she notes, “rules and available programs, plus the related legal aspects, change almost daily. It’s a challenge to stay on top of them. But that’s the job of a housing counselor.” (Roberts talks about foreclosure counseling in a NeighborWorks America video.)

With the Government Accountability Office reporting that complaints about fraudulent “foreclosure rescue” schemes jumped from 9,000 in 2009 to more than 18,000 in 2012, it’s critical to have a professional advocate on your side. (Since 2007, NeighborWorks America has managed, at the request of Congress, the National Foreclosure Mitigation Counseling program. It funds more than 1,700 agencies that have assisted nearly 1.6 million homeowners struggling to stay in their houses – without charging a fee. In fact, one sure sign of a scam is an individual or program that attempts to charge for this service. Yet, the survey found that slightly more than a third – 33 percent – of people think that free help is not as good as counsel that you pay to receive.)

While realtors and mortgage lenders are essential advisors as well, housing counselors with nonprofit organizations such as those that are supported by NeighborWorks America take a holistic approach to each client’s situation – helping them evaluate far more than how much a particular house is worth, which mortgage they can afford or whether they are eligible for re-financing.

“For example, some of the residents in our community are attracted to the less-expensive homes one county over,” recounts Letty Plasencia, a counselor with NeighborWorks Orange County (CA). “But you have to look at more than the sales price. How much time and money will it take to commute to your job, for instance?”

There is hard data showing that pre-purchase counseling by a trained counselor works. A study conducted of 75,000 loans originated between October 2007 and September 2009 showed that clients receiving pre-purchase counseling and education from NeighborWorks organizations were one-third less likely to fall behind on their payments during  the two years after receiving their mortgage.

It’s not surprising that most people don’t think first of turning to a nonprofit housing counselor. Most local organizations do not have the budget for extensive public education. (One of the most successful national campaigns was the “Nothing is worse than doing nothing” campaign launched by NeighborWorks America and the Ad Council, centered on a series of public service announcements for broadcast. Another is the Loan Modification Scam Alert website and hotline.) Instead, local organizations typically rely on referrals and word-of-mouth. The good news is that clients do spread the word to friends and family. And many states and organizations, such as unions, have institutionalized referrals to housing counselors for residents or employees who find themselves underwater.

“In New York, lenders are required to notify homeowners in trouble,” says Roberts. “The problem is that they often don’t trust the lender by that point, or they assume they are a lost cause and no one can help them. I’d say 75 percent of the time, we get these individuals late in the game, from a lawyer or Supreme Court judge who handles settlements.”

The challenge for housing organizations is to build and better leverage relationships with a diverse array of other community stakeholders, such as schools and health clinics, to spread the word about their services to people before they need it. (And of course, expanded demand would require increased staff.) It is clear, counselors agree, that the best time to see a housing adviser is early on, prior to any critical decision-making.

Kevin Washington, a counselor with Neighborhood Housing Services of New York City (NHS-NYC) who specializes in foreclosure intervention, gives this example: “By the time people get to me, they often have gotten advice from a neighbor down the block who has been through foreclosure before, and they end up getting further in trouble. For example, sometimes these clients close all of their accounts down to pay off their debts, but that’s very bad for their credit scores. Plus, you’ll need some money to cover down payment and closing costs (to buy a more affordable house). You don’t need to pay off your debts; you just need to make the required payments. If they get to us too late, and they’ve already made mistakes, they have to wait even longer (to buy) so they can build their assets back up again.”

But perhaps Ruth Pena, another counselor with NHS-NYC, sums up the value of a housing counselor the best: “We create an action plan, and then hold (our clients’) hands through the entire process. Who else will do that?”