Will Louisiana See a Surge in Mortgage Defaults After the Oil Spill? 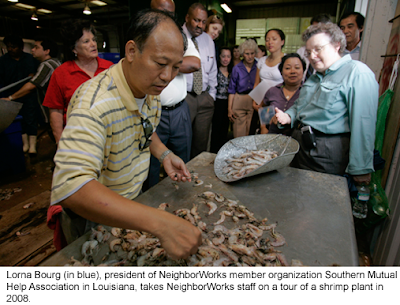 In today’s Wall Street Journal, housing nonprofits expressed fear that the oil spill in the Gulf may cause a surge in mortgage defaults as residents lose income and business from the ongoing crisis. With the caveat that its way too early to know what will be the long-term economic impact of the oil spill, economists, real estate agents and nonprofit leaders interviewed for the piece, pointed to some “worrisome” signs.

Lorna Bourg, president of NeighborWorks member Southern Mutual Help Association (SMHA) based in New Iberia, Louisiana said, "It's a real crisis." She added that many fishermen rely on the summer shrimp season for most of their income.

Lauren Anderson, chief executive officer of Neighborhood Housing Services of New Orleans, another NeighborWorks organization in Louisiana, said in her interview that she expects a surge in mortgage defaults within the next few months from people whose income has been hurt by the spill.

According to the Wall Street Journal, Louisiana has been spared from the worst of economic recession due to a boom in rebuilding following Hurricane Katrina, as well as stable employment from the oil and fishing industries. With jobless and mortgage default rates currently below national averages, some are worried that Louisiana’s rebound will be lost.

Read more about it in the Wall Street Journal.