Getting Out the Vote for Starbucks' Vote.Give.Grow.

As you may have seen on our NeighborWorks Twitter and Facebook pages, we are pretty excited about the results of the Starbucks Foundation Vote.Give.Grow. contest. Nine NeighborWorks organizations participated, and they raised a combined total of $125,000. Not too shabby.

First, a little background. Vote.Give.Grow. is a new initiative which allowed Starbucks cardholders to vote every week on how the foundation should allocate funds among 124 nonprofits nationwide. The best part? Every nonprofit selected for the contest is guaranteed to win at least $5000! That said, the object is to get the most votes, because more votes could mean thousands more dollars – up to $50,000 to be exact.

To find out how our network members succeeded in getting out the vote, I interviewed Matt Miller, communications and marketing director of Community Housing Initiatives (CHI) in Iowa. Matt explained that Starbucks first contacted them in March about the April contest. At first, they thought it was too good to be true, but, after doing their due diligence, they realized the magnitude of this opportunity. However, there was a big challenge, namely a competing nonprofit in Iowa with more than eight times the number of employees. 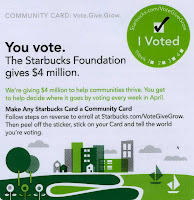 Matt, being the entrepreneur he is, went straight to the local Starbucks and worked with the store managers to hand out the Vote.Give.Grow. coasters he’d received from Starbucks Foundation (see image at right). Next, he did the same thing at libraries and the local hospitals. Then he jumped into digital media with a weekly email campaign and a big sign on CHI’s website.  His favorite marketing tool though? Social media. Twitter and Facebook allowed him to easily spread the word to local government and other nonprofits. CHI even made their main Facebook image include information about the contest.

In the end Matt helped CHI win first place in Iowa and a grant of $15,000, which they will use to fund an Eviction Prevention Program this summer. I haven’t had a chance to learn how all our other member organizations will use their funds, but I’m confident they will use them wisely, and I hope they will share their stories too. Feel free to send me an update at achaikin[at]nw.org or to post directly to the NeighborWorks America Facebook page.
at 9:39 AM No comments: