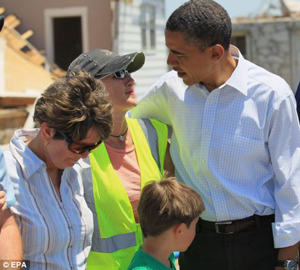 President Obama unveiled on Monday new rules to make it easier for homeowners to refinance their mortgages at today’s low-interest rates, no matter how far their property values have tumbled. The new changes to the Home Affordable Refinance Program (HARP) would apply to loans owned or guaranteed by Fannie Mae and Freddie Mac and to qualify, homeowners must be making on-time payments on their current mortgages.

The president announced the plan in Las Vegas, Nevada, one of the states hit hardest by the foreclosure crisis and where the unemployment rate is 13.4 percent, the highest in the nation. Federal officials hope that reducing monthly payments would free up cash for consumers to spend elsewhere, giving not a boost not only to the housing market, but to the overall economy as well.

In Kansas, NeighborWorks America’s Midwest regional director John Santner welcomed the potential boost for homeowners and housing. “Anything we can do to help solve the housing crisis would be a good thing,” he told the Kansas City Star.

HARP was originally unveiled in 2009, but it has fallen far short of expectations. It was designed to help up to 5 million people, but so far has reached only about 822,000. This new version would eliminate the previous limits which allowed only borrowers whose mortgages were no greater than 125 percent of the value of their homes to qualify. And it would remove certain fees and relieve banks of certain risks as part of the changes.

The program is not expected to increase costs to taxpayers. The Federal Housing Finance Agency is expected to publish final details in mid-November and borrowers can begin to enroll during the first quarter of next year.
at 12:15 PM No comments: