NeighborWorks America expanded its curriculum of energy efficiency and healthy homes courses to include two new classes designed to help community leaders engage residents in creating greener communities, and to help non-profit managers improve the green footprint of their organizations.

“These courses are great additions to our existing offerings, providing important information for nonprofit leaders that will help them reduce the carbon footprint of their organizations, and help educate residents on how to ensure that the communities in which they live are healthy and sustainable,” said Thomas Deyo, director of green programs at NeighborWorks America.

Greening Your Organization is supplemented by a guide released earlier this year by NeighborWorks America, Greening Your Nonprofit From the Inside Out. Produced in conjunction with Strategic Sustainability Consulting, the 84-page guide contains case studies that non-profit organizations around the country can follow to lower their energy usage and increase the health quality of the places they work and the housing that they build.

“All of the courses and the guide are part of NeighborWorks America’s program called, “Think Green, Act Green”, a commitment to advance environment responsibility across the community development industry,” added Deyo. More on this commitment can be found at www.nw/green.

With a grant from the NeighborWorks Innovations in Factory Built Housing program and assistance from other funding partners, NeighborWorks member NHS of South Florida has completed the first green, hurricane ready Royal Concrete house in Miami. The home is all concrete and can withstand up to a category five hurricane. It is energy efficient with heavy insulation built in, all Energy STAR appliances and a solar water heater. It took took just four hours to install.
Watch this brief, minute and a half video of the installation below. If you have trouble viewing it, go here.
at 10:26 AM No comments: 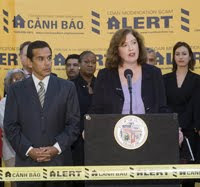 Today in Los Angeles, NeighborWorks America and a partnership of local, state and national government agencies, nonprofit organizations and financial institutions gathered at City Hall to launch a national public education campaign designed to help homeowners protect themselves against loan modification scams, find trusted help and report illegal activity to authorities. This was the first of several kickoff events scheduled to announce the “Loan Modification Scam Alert” campaign rollout in major cities across the country.

The national foreclosure rate has reached an all-time high of 7.97 percent, and millions more foreclosures are expected in coming years. “As the foreclosure rate grows, more and more homeowners are being deceived by scam artists who prey on their fears,” said Eileen Fitzgerald, Chief Operating Officer of NeighborWorks America. “This campaign is based on the belief that knowledge is the best defense, which is why the campaign equips homeowners with the tools they need to minimize their risk and stop scammers in their tracks.”

Los Angeles is one of several metropolitan areas in California to consistently rank among cities with the highest foreclosure rates. It has the highest number of homes in foreclosure in the nation. “Too many residents in Los Angeles, like homeowners nationwide, are losing thousands of dollars and their homes to scam artists who make big promises and then do little or nothing to help them save their homes,” said Los Angeles Mayor Antonio Villaraigosa. “Anyone can be a victim and the people of Los Angeles need to know what resources are available to them. They need to know that legal aid groups, financial institutions, and HUD-certified counselors are offering free services to anyone seeking help.”

NeighborWorks America will coordinate the nationwide effort through its 235 community-based affiliates and other local, state and national partner organizations, including the Department of Housing and Urban Development (HUD), the Federal Trade Commission, the U.S. Department of the Treasury, Fannie Mae, Freddie Mac and the Lawyers’ Committee for Civil Rights Under Law.

Together, the partners aim to reach thousands of distressed homeowners in hundreds of communities at high risk for fraud activity. The campaign will target all audiences, but its resources are focused sharpest on those groups that have already seen high levels of scam activity, including seniors, Hispanics, African Americans and Asian Americans.

As part of the campaign, information, resources and reporting capabilities are now available around the clock at http://www.loanscamalert.org/ and by calling 1-888-995-HOPE (4673). Community groups may also visit the Web site to access campaign materials available for download and distribution in their area.

The partnership has designated November as “National Loan Modification Scam Awareness Month” and will promote a variety of special events and initiatives throughout the month. In the coming weeks, the campaign will also travel to Miami (Oct. 29) and Columbus (mid-November). For more information about the campaign visit http://www.loanscamalert.org/.

A Webcast of the Los Angeles event will be available on-demand anytime after noon PST on Oct. 26 at: http://media.xfactorcom.com/loanmodificationscamalert/20091026/

An effort to revitalize 10 of Milwaukee's low-income areas drew praise from NeighborWorks America CEO Ken Wade during a recent visit to the city. The plans to revitalize the Lindsay Heights and Clarke Square neighborhoods are part of a 10-year, $50 million commitment by local real estate developer and philanthropist Joseph Zilber to improve low-income neighborhoods.

But Wade’s praise was not delivered because of the scope of the Zilber Neighborhood Initiative. He was impressed with the level of resident involvement in developing the plans.

"Usually, it's professional planners, but engaging residents lets them present the vision for what they want, and professionals can then help the residents implement the plan," Wade said in an interview with the Milwaukee-Journal Sentinel.

The plans were presented in conjunction with the NeighborWorks America Community Leadership Institute, a gathering of 900 grassroots community leaders from across the country. They met in Milwaukee last week to improve their skills and knowledge of how to rebuild their own low-income neighborhoods.

According to the Journal Sentinel’s report, more than 1,000 residents from the two neighborhoods participated over the past 10 months to brainstorm how to create quality-of-life plans that will guide the program's development. The residents focused on creating new jobs and economic development and improving parks, education, health, public safety and housing. Read more at jsonline.com.

NeighborWorks Waco is giving foreclosed homes a new purpose. Through the organization's PEARLS program, abandoned homes are being converted into lease-to-buy properties for renters. If you have trouble viewing the video below, go here. You can also read about it here.

The U.S. Department of the Treasury's Community Development Financial Institutions Fund (CDFI Fund) will be conducting a series of conference calls regarding CDFI Certification. These calls will serve as a forum for potential certification applicants to ask questions of Fund staff about becoming a certified CDFI.

Instructions
To access either of these conference calls, dial (202) 927-2255 and enter pin number 687434. No prior registration is necessary. The phone and pin numbers are the same for both calls.

For more information about CDFI Certification eligibility and the application process, or the CDFI Fund's programs, visit the Fund's Web site at http://www.cdfifund.gov or contact the Fund Help desk by emailing cdfihelp@cdfi.treas.gov or by calling (202) 622-6355.
at 9:22 AM No comments:

Solar Village on the National Mall 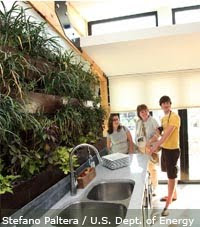 Some 800 students from 20 universities in four countries (U.S., Canada, Germany and Spain) built the solar-powered village on the National Mall. Teams had until Wednesday, Oct. 7, to assemble the homes, and are competing in 10 contests from Oct. 8-16. The homes are open to the public from Oct. 9-13 and Oct. 15-18.

Each team got $100,000 from the Energy Department to design its home over the last two years, then transport it and assemble it on the National Mall. The department, for its part, hopes to get a payback over time: research that leads to reduced costs for solar technology.

Home buyers have until October 30 to apply to take advantage of Freddie Mac’s SmartBuy program, which began in July and offers up to 3.5 percent of a home’s sale price to help cover closing costs. Through participating lenders, Fannie Mae will offer mortgages to buyers who make a down payment of 3 percent, and these buyers do not have to secure private mortgage insurance, as they would when doing business with nearly any other lender.

Also, in areas hit hardest by the economic downturn that have qualified for federal financing through the National Stabilization Program, which helps distressed communities, Fannie Mae may discount its foreclosed properties by up to 15 percent, The Times reported.

Most of Fannie Mae’s foreclosure incentives are offered to buyers who will use the property as their primary residence, or NeighborWorks or other local organizations that rehabilitate properties and sell them to owner-occupants. View article.

The Christian Science Monitor reported recently that affordable housing purchased by social investors is allowing low-income earners to find community-oriented housing in expensive markets from Marin County, Calif., to New York City. Areas where teachers, waiters, and receptionists typically can’t afford to live are now within reach, thanks to a growing number of partnerships between housing nonprofits and investors.

CHP President and CEO Amy Klaben pointed out to The Christian Science Monitor that despite the increase in socially responsible lending, sustainability is a challenge. Though CHP can now buy five homes for a relative bargain, if there are still 15 more vacant houses on the street, “you aren’t making a market impact,” Klaben said.

States with strong anti-predatory lending laws fared better during the foreclosure crisis than states without these laws, according to a new study conducted by the University of North Carolina at Chapel Hill's Center for Community Capital.

The study was funded by the North Carolina Department of Justice and the National State Attorneys General Program at Columbia University. Read more findings in the news release.

NeighborWorks America’s Stable Communities Program is holding a photo contest in conjunction with the NeighborWorks Training Institute Symposium: “Rising to the Challenge: Stabilizing Communities in the Wake of Foreclosure,” which will be held on December 9, 2009 in the Washington DC metro area. Photos related to community stabilization and neighborhood revitalization efforts, particularly in areas impacted by foreclosure, will be accepted.

Prizes will be awarded as grants to the NeighborWorks organizations submitting the winning photos, as follows:

The winning photos will be unveiled in a presentation at the Symposium. See how to enter and other rules.
at 1:53 PM 1 comment:

NeighborWorks America supported a first-ever Vietnamese Community Leadership Institute (CLI) in Seattle in September. It was sponsored by NeighborWorks Community Building and Organizing Program, at the request of its member organization HomeSight, Inc. NeighborWorks sponsors national community leadership institutes each year, but this was the first time a NeighborWorks organization has held an in-language, culturally-based institute.

“Many local NeighborWorks organizations have created their own local CLI's upon return from one of our national events,” said Susan Naimark, acting director of NeighborWorks national CBO programs. “When Tony To, HomeSight's executive director, asked for support to do a bilingual CLI for the Vietnamese community, we were glad to offer our assistance.”

HomeSight hired one of NeighborWorks most seasoned community building and organizing trainers, Karimah Nonyameko, to work with a local Vietnamese trainer. This ensured the relevancy and cultural appropriateness of the training. Having the program in-language also made it a lot more personal for the people involved.

“I’ve been to a lot of leadership training in my line of work, but the VCLI gave me tools to reinforce my knowledge and it also renewed my passion to work in the community,” Thu-Van Nguyen, who works at Asian Counseling and Referral Services, told Northwest Vietnamese news.

“We look forward to sharing the materials and learnings from this event with other organizations across our network,” said Naimark.“It's a great model for working with non-English speaking communities, giving them tools to engage with each other and the broader community.”

View photos from the event.