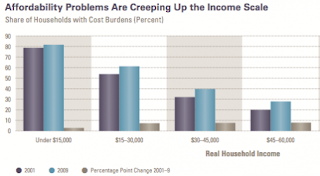 The Joint Center for Housing Studies of Harvard University recently released its 2011 State of the Nation’s Housing report. The annual report identifies and analyzes demographic, economic and social trends that affect the housing industry, and is a must-read for thought leaders, policymakers, funders and practitioners.

Don’t have time to read it all now? Here are the 10 things we think you should know right away:

3. The Rental Market is Tightening

4. The Homeownership Rate is Declining

6. The New Credit Environment is a Significant Obstacle to Would-Be Homebuyers and the National Recovery

10. Affordability Problems Are Creeping Up the Income Scale

Of course, the beauty of the State of the Nation’s Housing report is in the detailed findings and sources it describes, so do try to read it soon. By following their sources, you can often find local data to compare to the national findings, giving your organization a jump-start on market or SWOT analysis, or a way to start a meaningful discussion with your board of directors about future direction.

What might these top-ten findings mean for your work?