Four reasons why Americans' ‘financial capability’ is so low

By Pam Bailey, NeighborWorks America blogger
With the insecurities of the Great Recession still fresh, and continuing to bite for others, the need for each of us to be savvy managers of our personal finances is obvious. Yet, 11 years after the U.S. Congress first declared April Financial Literacy Month (changing to “Financial Capability Month” in 2012), it’s clear that too many Americans -- whether college-educated or not -- lack the knowledge, skills and attitude needed to get the most value they can from whatever financial resources they have.

NeighborWorks America commissioned a survey this spring that documented the size of the problem: Chief among the findings is the alarming fact that approximately 70 million (29 percent) of adult Americans have no emergency savings in place, and another 53 million (21 percent) have only enough money saved to get by for a month or less. Those findings are not surprising in light the results of another survey, conducted by the National Foundation of Credit Counseling, showing that 61 percent of U.S. adults -- the highest percentage in six years -- admit to not keeping a budget.

Clearly, all of the education and resources offered by a myriad of organizations and businesses have yet to reach large numbers of people -- or result in the holy grail, behavior change. So, what’s holding back our progress? I asked a few experts, both in the classroom and in the trenches, and here are four dynamics they say must be overcome through innovative outreach, education and programming:

1) Misconceptions about who can benefit 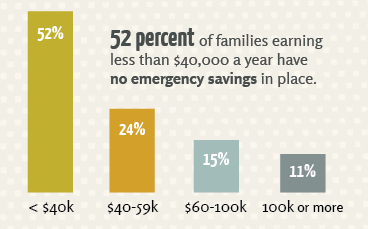 The NeighborWorks America survey found that more than half of families earning less than $40,000 (52 percent) have no emergency savings. Yes, it’s a no-brainer conclusion. But the problem is bigger than their low incomes. Too many people – including funders, practitioners and potential beneficiaries -- believe that those with low incomes and few assets cannot be helped with financial education, counseling or coaching.

“The perception that low-income people can’t save has persisted for years, ever since IDAs (individual development accounts) were first created in the 1990s,” observes Christi Baker, director of asset-building programs for the Mission Economic Development Agency (MEDA) and a faculty member for NeighborWorks America’s training program for financial-capability counselors and coaches. “But that is simply not true. With the right incentives, education and support, anyone with aspirations, no matter how meager their assets, can improve their personal finances.”

Sheri Powers, director of  The Unity Council’s Homeownership Center in Oakland, CA, adds that individuals with low incomes often think they have less money than they actually do. “We have our clients track every single expense for three months,” she explains. “Then we go through the data with them. They typically have no idea they were spending so much money on things like dining out and movies. But numbers don’t lie, and they discover that they actually aren’t too broke to save.”

MEDA and The Unity Council were among the 30 organizations that participated in a financial-capability demonstration project completed last year through a partnership between NeighborWorks America and the Citi Foundation. The project was designed to identify how to establish and sustain programs that result in positive behavior change, and the results were summarized in a report that offers specific suggestions for organizations looking to enter the field or improve their offerings.

Powers adds that Americans live in a culture that stresses “living in the now,” with few immediate rewards for saving. As a result, budgeting is not a skill that is widely taught. “One of our instructors says that in China, people plan for 100 years, into their grandchildren’s generation. But in the United States, there are not a lot of messages in pop culture about the sexiness of saving,” she observes.

As a result, people resist thinking ahead to retirement or an unanticipated emergency.  One of her tactics, Powers says, is to pose direct questions that confront clients with choices and their consequences – in terms that relate to their personal priorities. In the NeighborWorks America survey, “saving for retirement” was the most commonly cited financial goal.

“Chances are good today that you’ll live to be 90 years old,” Powers says, citing a common conversation she has with clients. “Let’s say you retire at 70. That means you’ll need to support yourself for 20 years. How do you want to spend your last 20 years on earth?”

3) Resistance to asking for help

Both the National Foundation for Credit Counseling survey and a poll commissioned by NeighborWorks America last fall, focusing on how adults educate themselves before buying a home, found that rather than seeking financial help from professionals, many people simply consult with family and friends or the Internet.

“People often think they can handle it themselves,” observes Powers.  “They may also not want to admit to personal struggles or to share such intimate information with ‘outsiders.’ But we’ll challenge them and ask, ‘So, how’s that worked for you?’”

Women and single parents often feel selfish if they set personal financial goals, adds Powers. Her team reminds them of the instructions they hear on an airplane: “In case of an emergency, secure your own oxygen mask first, then assist the person next to you – in other words, your children. How can you help them if you don’t take care of yourself?”

The surveys also showed a lack of awareness that many nonprofit organizations offer this kind of assistance at an affordable rate, as well as reluctance to use them once they are aware.

“A couple of years ago,” says Baker, “a group in New York surveyed both clients and potential clients, and it was clear there is a stigma about going to nonprofits. They either didn’t identify as a ‘poor person’ who needed a ‘charity program,’ or didn’t think that nonprofits could employ really expert professionals. We need to dispel those myths. The reality is that nonprofits offer financial-management assistance to people in many income brackets. And the training they receive from NeighborWorks America is highly focused on demonstrating positive outcomes.”

Of course, the problems cannot all be laid at the door of un-informed or time-starved individuals with conflicting priorities. As was evident in the recent housing crisis, there are plenty of examples of predatory business practices that prey on consumer weaknesses.

For example, Alex Anderson, one of the financial coaches who serve The Unity Council clients, worked with one “un-banked” client whose records showed a plethora of $8 fees. It turned out the client was using a debit card issued by a discount-store chain, and every time she tried to withdraw more money than she had available, she was charged the fee instead of just being notified of insufficient funds.

“The fees added up and eroded her disposable income by four percent,” recalls Anderson. “There’s a huge industry out there that takes advantage of these folks.”

Next post: The missing piece of the puzzle -- counseling vs. coaching, the story of Ruben and Jesusita Hernandez.
at 5:01 PM 2 comments: