Bullying is painfully common on school campuses everywhere – with the Centers for Disease Control and Prevention estimating that one in four high school students are victimized, and more than two-thirds are witnesses.

Among the frequent victims are children from low-income families who can’t afford to dress in “trendy” clothes. That’s particularly a problem for the immigrant farmworker families served by the Cabrillo Economic Development Corporation (CEDC), whose children must attend school alongside wealthier students in California’s Ventura and Santa Barbara counties.

“Bullying often starts when someone judges your appearance,” says Patty Suarez, an 18-year-old who lives in one of CEDC’s 22 rental communities. “Like, I saw one girl get harassed because she wore knock-off boots. So the kids in my youth group decided to do something about it.”

Youth engagement is a core focus of CEDC’s community-building program. The organization has nurtured a youth-leadership group at each of its rental properties,  with activities ranging from lobbying the city council for better access to mass transit in their neighborhood to a mural-painting project that brought together different generations within families.

“We ask the youth what they care the most about – what they like doing, what they think needs improvement in their community,” says Juliana Gallardo, a community building manager who first joined CEDC in 2009 through the AmeriCorps VISTA program. “Then we help them focus on an activity they choose.”

In 2013, CEDC’s community-building team worked with youth leaders at the organization’s Villa Cesar Chavez property to start an anti-bullying campaign, including “flashmobs” to raise awareness at local events, after participants began reporting problems at school.

“My parents couldn’t pay for new clothes, because they have to pay for so many other important things, like food,” Vanesa Palomar told a local newspaper, describing how fellow students snickered at her worn garb. “Sometimes one of them would get laid off, or they wouldn’t have work for a few days. They worked really hard, but it wasn’t enough.”

Suarez’ group at the Fillmore Central Station Apartment property soon joined in. Then, CEDC took the youth on a field trip to an organization in nearby San Luis Obispo that had developed a unique response to the same challenge: a “closet” of donated, fashionable clothes for youth who couldn’t afford them otherwise. They decided to start their own version of the project, which they call PACT (“providing accessible clothing to teens”).

To help the teens develop the organizational skills they would need to initiate and operate the program, CEDC sent the team to NeighborWorks America’s Community Leadership Institute last October.

“It was pretty cool to meet older people who are so interested in helping communities. More people care than I thought,” Suarez recalls. “They were surprised to see kids at the conference. But they were very welcoming.”

The trip to the conference in Sacramento helped give the teens the confidence to launch the project, and they began visiting yard sales as well as soliciting donations via community flyers and social media. “The response was so great that we literally filled up the back of a large truck,” says Gallardo. “And the donations keep coming in.” 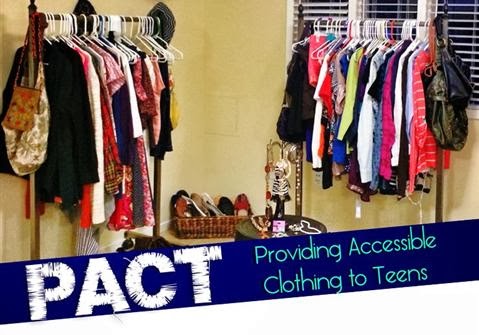 The youth sort the clothes; any items that aren’t appropriate are given to a local homeless shelter or other charity. In January, the PACT teen closet opened in the community room of the Fillmore apartments. However, the complex is five blocks away from the school, and the youth want its services to be available to everyone in need under the age of 18 living in Ventura County – not just their building’s residents. So, PACT is re-locating to the Big Brothers Big Sisters mentoring room at the town high school – complete with an open house on April 12. Open twice a week for two hours each day, PACT is totally run and staffed by the students -- offering an ideal exposure to the skills required for entrepreneurship, with plenty of opportunity for job training.

“We’re even partnering with a local organization that places students age 16-21 in internships. PACT will be a host site,” says Gallardo.

According to Suarez, PACT has become so popular that it has taken the “sting” out of wearing second-hand clothes. PACT clothes are cool!