The financial future of our children is determined, in part, by how much they know about money. NeighborWorks Umpqua offers classes that teach money management skills and financial wellness to our young people between 10 to 17; we call it the “Youth 3As.”  The class introduces financial management concepts at a kid’s level while allowing participants to earn matching dollars towards their own asset purchase. Those asset purchases can be anything athletic, artistic, or academic in nature, hence the name “3As.”Over the years we have worked with many young people, and I would like to believe that our classes have a long lasting effect. To be perfectly honest, though, it’s not that often that we hear back from the kids after they have made their purchase — that is, until I met Morgan and her sister, Quinn.

Morgan and Quinn contacted our office almost two years ago and wanted to save for dance lessons.  They had been very good savers, and by the end of the classes had reached their goal of saving $300 each. This qualified them for our 2:1 match of an additional $600 each — an impressive $1,800 for the two at the end of the program and enough to pay around 50% of their annual dance lesson costs ($1,500-2000 for each girl each year). 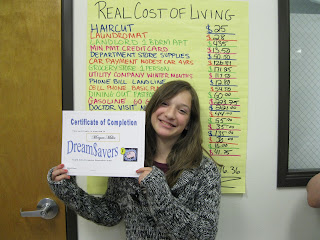 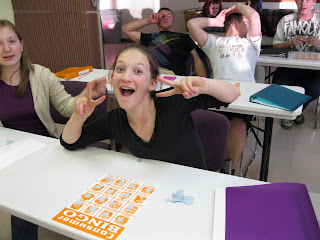 I didn’t hear about Morgan and Quinn again until a month ago when Morgan contacted me.  She explained that she was participating in the Miss Outstanding Teen pageant and had chosen financial education and goal setting as her platform. Her goal, she explained, was to teach the concept of goal setting and saving to little kids.  She had made arrangements with the local Boys and Girls Club and had even begun writing grants for some start up money.  She was off and rolling!

I asked Morgan what inspired her to do this, and she explained that setting goals and then saving for them feels good. For six years, Morgan and her sister had been babysitting, dogwalking, selling doughnuts, doing chores for neighbors and many other fundraising activities to pay for their own dance classes and school trips. Cumulatively, she and her sister had raised thousands of dollars.

Morgan liked being able to have the things that mattered to her, without needing her parents to pay for it. She thought others should learn to do the same and she is even writing a book about saving.  Morgan is a great example of how our programs create good savers, and good citizens.

For information about Morgan, or other programs offered by NeighborWorks Umpqua, email Rebekah Barger at rbarger@nwumpqua.org  or visit our website at www.nwumpqua.org
at 2:00 PM No comments: