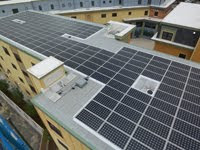 About 1,000 families in Vermont will benefit from an energy saving solar water project announced on Jan. 13 by Senator Bernie Sanders (I-VT) in cooperation with NeighborWorks chartered member Champlain Housing Trust. Senator Sanders launched the project at the Champlain Housing Trust's Salmon Run Apartments, one of the four affordable rental developments that will be part of this project.

According to Senator Sanders, the $500,000 project is the largest of its kind in the state. The grant, secured from the U.S. Department of Energy, will put solar equipment in 80 apartments in Salmon Run. It will also help finance installation of water heaters in 322 more apartments at three other affordable housing developments in Vermont. The grant will be matched by $700,000 in additional public and private funds, according to Senator Sanders.

I am the sort of guy who loves to taste revolutionary stuff. Presently I am manufacturing my hold solar panels. I'm making it all alone without the help of my men. I'm using the internet as the only way to acheive this. I encountered a very amazing site that explains how to create photovoltaic panels and so on. The site explains all the steps required to solar panel construction.

I'm not exactly sure about how precise the data given there is. If some people over here who had experience with these works can have a peak and give your feedback in the page it will be great and I would extremely appreciate it, because I truly lav solar panel construction.

Tnx for reading this. U guys rock.